ORGANIZE AND PROMOTE CONTEMPORARY ARTISTIC CREATION EVENTS OF ALL TYPES HIGHLIGHTING THE HERITAGE OF OLD LYON, HISTORIC SITE OF LYON THAT IS
A UNESCO WORLD HERITAGE SITE
AND HAS AN EXCEPTIONAL HERITAGE 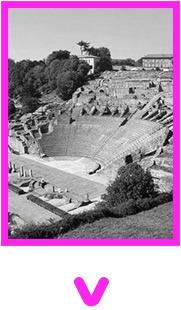 In 43 BC, Lucius Munatius Plancus founded the Roman city of Lugdunum on the hill of Fourvière.

Lugdunum means “well-lit height”, from both roots “lug”, light and “dunum”, a military fort, mount.
The development of the new city was very fast: thirty years after its foundation, the Roman theatre was probably completed, and the amphitheater was built in 19 BC and enlarged in the 2nd century. As early as the 3rd century AD, the city retreated to the right bank of the Saône.

The Fourvière hill concentrates many elements of Roman civilization: the archaeological garden with the great theatre and the Odeon, the Gallo-Roman museum, the thermal baths of the rue des Farges. 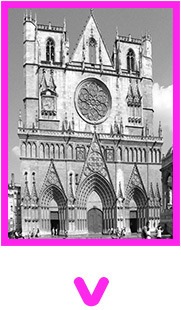 The history of Lyon is closely linked to the Saône, which is truly the birthplace of the city.

In the Middle Ages, the heart of the city was around Saint-Jean Cathedral, which was built over three centuries from 1175 to 1480.

The Gothic cathedral is oriented East-South-East. The building, built of white limestone, has four towers without arrows. The most visible feature of the façade is that it is topped by a high triangular gable, higher than the façade towers.
The bedside of the building is of Romanesque style and is located on the Saône side; it is, therefore, free of arch-buttresses.
The square in front of the cathedral corresponds to Place Saint-Jean, which is the center of the Saint-Jean district and Old Lyon 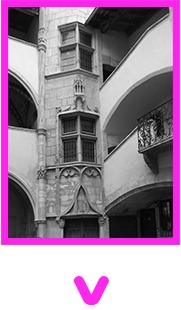 Old Lyon (districts of Saint-Paul, Saint-Jean, and Saint-Georges), on the right bank of the Saône, was the center of Lyon in the Middle Ages and the Renaissance.

During the Renaissance, Lyon was a commercial crossroads and high place of trading and banking:
as in Antiquity, Lyon’s geographical location makes it a hub for merchandise trade between countries of the South and the North.
Large families of Italian bankers and merchants from Florence, Tuscany, and Venice settled in Lyon and built sumptuous residences in the St-Jean and St Paul districts. The current Gadagne Museum was the private mansion of this Florentine family. 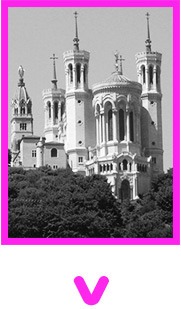 On the Fourvière hill until the end of the 18th century, a large number of ecclesiastical convents were established, which disappeared just after the 1789 Revolution, but many transformed buildings can be found today.

The Notre-Dame de Fourvière basilica was built between 1891 and 1894: in neo-Gothic and neo-Byzantine style, it is one of the most visible landmarks of the urban area and one of the symbols of the city of Lyon.

The development history of de Lyon is especially original. The evolution of most major historic cities is often in concentric format, that of Lyon is very clearly oriented from West to East: the Roman part from the top of the Fourvière hill, the medieval and Renaissance districts on the right bank of the Saône then the left bank (Presqu’Ile), the following periods until the 19th century between the two rivers (Rhône and Saône) and on the Croix-Rousse hill, and finally from the 19th to the 20th on the left bank of the Rhône and beyond towards the East.

In 1998, the historic site of Lyon was listed as a UNESCO World Heritage Site.

It is a unique site with an exceptional heritage, located on the banks of the Saône, place of the foundation of Lyon. It was classified as a protected area (the first in France) in 1964 and attracts a large number of visitors.

The first event was held in collaboration with the Lyon 2019 Biennale of Contemporary Art, with a trip of urban art in Old Lyon, at the same time as the development with elementary schools of Old Lyon and Fourviere, of artistic creation projects (contemporary art, dance, photography) by pupils in year 5 and 6 classes, having for theme the art and the heritage.

This website uses cookies to improve your experience while you navigate through the website. Out of these cookies, the cookies that are categorized as necessary are stored on your browser as they are as essential for the working of basic functionalities of the website. We also use third-party cookies that help us analyze and understand how you use this website. These cookies will be stored in your browser only with your consent. You also have the option to opt-out of these cookies. But opting out of some of these cookies may have an effect on your browsing experience.
Necessary Always Enabled
Necessary cookies are absolutely essential for the website to function properly. This category only includes cookies that ensures basic functionalities and security features of the website. These cookies do not store any personal information.
Non-necessary
Any cookies that may not be particularly necessary for the website to function and is used specifically to collect user personal data via analytics, ads, other embedded contents are termed as non-necessary cookies. It is mandatory to procure user consent prior to running these cookies on your website.
SAVE & ACCEPT